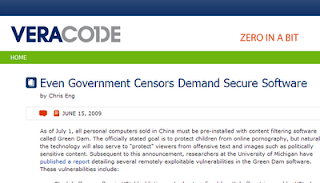 Were University of Michigan researchers doing the Chinese Government's bidding when they reported vulnerabilities in the latter's "Green Dam" content filtering software? In a story relayed by Veracode, Scott Wolchok, Randy Yao, and J. Alex Halderman at U of M not only found vulnerabilities, but offered the scathing taunt that the software supplier "Green Dam makes frequent use of unsafe and outdated programming practices that likely introduce numerous other vulnerabilities."
Was this fault-finding exercise an instance of academic due diligence, or the work of engineering lackeys serving the Chinese Government's desire to filter what its people can see? A harsh assessment, but distant lessons from Robert Oppenheimer loom large over the role technologists play in facilitating a regime's use of technology to oppress.

When you see something that is technically sweet, you go ahead and do it and you argue about what to do about it only after you have had your technical success. That is the way it was with the atomic bomb. - Robert Oppenheimer

Posted by knowlengr at 7:07 PM