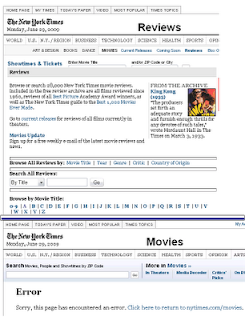 A broken hyperlink is no big deal. Some days it's a regular occurrence. It's another matter altogether when a major media outlet has more than a few dead links to itself.

The Times indexes its film reviews on a single page. Readers can select by title, year, genre, critic or country of origin. Title seemed a natural choice.

My search began on the "A" page. Select just the recommended films. The very second starred review, "A Man and His Dog," results in a dead link (error 404?). A fluke? Try "A Christmas Tale." "A Girl Cut in Two." "A Mighty Heart." "A Toute de Suite." "Across the Universe."

And so it goes, and not just titles beginning with "A". A casual attempt to find the "Man and His Dog" review through Google and Bing turned up an interview with the leading actor in this film. Is that the hidden review?

Yes, the New York Times has lots of reviews of lots of films. This symptom is to be expected (but no less annoying) when news stories move from headline position to archive or bit bucket. Yahoo's third party new story links are notoriously short-lived for this reason. But a recurring error across a valuable content area reveals a systemic problem at the Times. Perhaps its recent downsizing has resulted in the loss of valuable content, quality control staff, or, at the least, a certain lost expertise in how to use -- or compel proper usage of -- a content management system.